Friday, October 20, 1950 - With Newtown serving as the opponent in the 1928 game that was the first the Redskins had ever played, the mid-century contest between the neighboring districts marked the 21st meeting between the two schools. In fact, other than the war years of 1942, 1943 and 1944, the 'Skins and Indians had been mixing it up since the start. Making the game of that year even more special was the fact it was the first time the game was billed as Neshaminy versus Council Rock as Newtown had only changed its name in 1948 with 1950 representing the rollout year for the newly consolidated Neshaminy School District. And with the Langhorne group holding just a slight 11-7-2 edge, the series had been a good one with the squads of that year evenly matched and ready for the action on the field. Not failing to entertain, the teams had fought to a 6-6 tie with less than a minute to go in the fourth quarter, while the fans for both sides were screaming for a miracle. The question was: Which club would deliver? 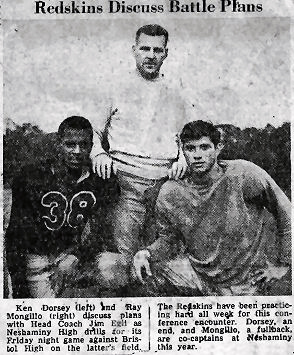 LANGHORNE − Jack Maguire, a substitute back, teamed with Al Hofmann in the last minute of play here last Friday night to give Neshaminy High a thrilling 12-6 conference win over Council Rock High of Newtown.

With the score tied at 6-6 and the seconds ticking away, Neshaminy got control of the ball with four minutes to play when Perkins punted to the 37. A sustained drive of 67 yards ended with Maquire hitting Hofmann with an aerial from the 19 as Hofmann was going into the end zone.

Here’s how the action went from the 37-yard stripe; Bob Castle skirted end to the 45 as Mongillo moved it to the 50. After one pass was grounded, Mongillo hit Maquire with a pass to the 30. Mongillo next battered his way off-tackle to the 23 with Maquire finding an opening to the 20. It was then Mongillo again who placed the ball on the 19 on a straight buck to set up the scoring play.

Maquire was supposed to have tossed a short jump pass over the line. He cocked his arm to fire the ball, but hesitated when he saw his receiver was covered. Hofmann then fanned out to his right and Maquire pitched a hard strike into his hands to win the game.

Ernie Peitch helped Neshaminy to its first score by putting Council Rock in an immediate hole by recovering one of the many fumbles of the night on the 28 after the opening kickoff. But Perkins intercepted Maurer’s pass two plays later on the eight.

After being set back to the three by a holding penalty, Warrick punted out to his own 45. Castle and Mongillo moves to a first on the 29. Two more thrusts by Mongillo and a sneak by Maurer moved Neshaminy to the nine and another first down. Maurer bucked to the five and Mongillo was halted on the foot line. Maurer went across to make it 6-0. Mongillo missed the kick. 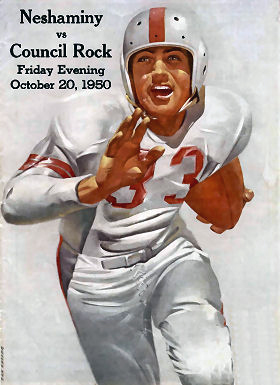 The rest of the first and second quarter was marked by the brilliant running of little Herm Teschner who ran the Redskins ragged around the ends. Pullen and Perkins also picked up a lot of yardage for the spirited Warriors who were “up” higher than Neshaminy for the game.

Late in the second quarter, however, Neshaminy moved from its own 45 to the Council Rock two-yard line. At that point Council rock held and the half ended with the loser’s in possession on the two.

On the third play following the second half kickoff Lou Maurer passed to Bob Castle from the 42-yard stripe. Castle took the ball on the 25 and raced for what appeared to be another Neshaminy score. But an offensive holding penalty shoved Neshaminy back to the 29 and nullified the touchdown.

The rest of the third period found Teschner, Ettenger, Morris and Perkins running at will. But Maurer broke up their final drive by intercepting Morris’ aerial on the Neshaminy 19.

At the start of the last quarter Council Rock tied the score. Four linemen broke through to block Peal’s punt on the 23. George Ettenger grabbed the loose ball and raced over to knot the count. Teschner’s kick was wide and the score was 6-6.

Neshaminy proved it could bounce back despite getting some bad breaks late in the game as they staged their own do-or-die drive with time running out. The winning drive allowed them to show they had come prepared to take it all the way as happened when Hofmann snagged the Maquire throw for the winning score as the clock was expiring. 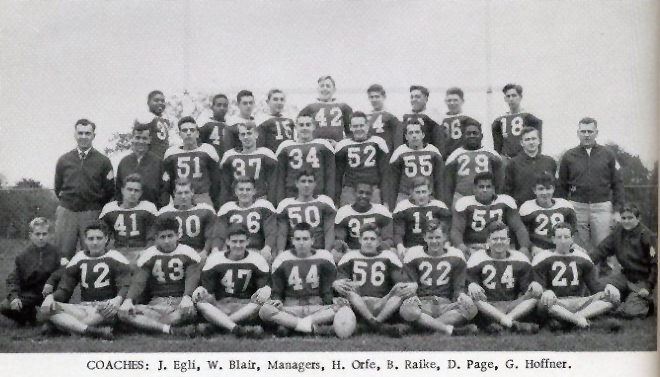 Editor’s Note: The 1950 team was the third during the four year reign of head coach Jim Egli. With his best teams probably the 1949 and 1950 groups, the ’50 boys weighed in at 5-5 and played tough football all season long. In fact, showing plenty of grit and fight, they were a typical scrappy Redskin group that fought all 48-minutes of each week’s game, never quitting on the fans or themselves. Lead by Hall of Fame members like Ken Dorsey, Lou Maurer, Al Hofmann, Ferman Lex and Steve Cloak along with other stalwarts like Ray Mongillo, Ed Hurst, Bob Castle, Don Barnett, Ed Carber, Don Leitch, Ernie Peitch, Wes Galloway, Elmer Van Sant, Joe O’Brien, Ray Brodie, Jack Maquire, Tom Dilorio, Charles Yantis and Bill Turner, among others, Coach Egli’s 1950 Moleskinners lost 4 of their games by just 6 points or less. Only that year’s LBCL champ, Bensalem, managed to get the best of the ‘Skins by a more significant margin in what was then the still traditional season closer. On the other end of the season − the opening game − the Redskins also played another local school which was using its new name for just the second year with that being Pennsbury. And although requiring just a few more years of fine tuning and “baking time”, the battles that were Neshaminy versus Pennsbury would soon enough become legendary throughout the state.