December 1959. The first All-State team in Pennsylvania was selected by the Associated Press in 1939. The United Press International followed suit in 1952. And although there had undoubtedly been many capable and talented players at Langhorne-Middletown high and then Neshaminy − and throughout Lower Bucks − not a player from the school or the area had been selected as "All-PA" through the 1958 season. But then in 1959 a junior Redskin, a player who had lead the LBCL in scoring as a sophomore fullback and then duplicated that feat as a junior, was selected to the UPI's All-State second team. And from there on out it was clear the dam had burst for both Neshaminy, and other teams in Lower Bucks, as the door had been kicked wide open by a Redskin on every all-time list that's yet been compiled -- Harry Schuh. 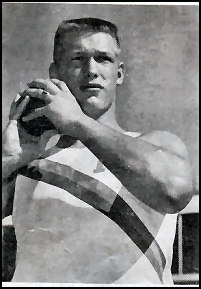 LANGHORNE: Harry Schuh! For those of us who grew up in the area in the late ’50s and ’60s and followed the sport of football, particularly Neshaminy football, perhaps the first name we heard that grabbed our attention was that of Harry Schuh. A four-sport athlete at Neshaminy (his other sports included basketball, wrestling and track in addition to football), he lead the Lower Bucks County League in scoring as a sophomore and junior in 1958 and 1959 before Jack Stricker, Schuh’s longtime friend and backfield mate, just edged him out as a senior in 1960 preventing what would have been the first “three-peat”.

Playing under Harry Franks and John Petercuskie, Schuh and his Redskin teammates fashioned a three year record of 28-2-1 with the 1958 through 1960 teams smack dab in the middle of the “Golden Years” that that time was for the Langhorne squads. Loaded with talent year-after-year, and with two of its legendary coaches at the helm, Neshaminy was then in the midst of establishing itself as one of Pennsylvania’s premier scholastic clubs when Schuh was wearing the Blue and Red.

Still, and notwithstanding the other great players that had worn the Redskin uniform before him, through 1958 not a single Redskin gridder had been selected All-State even though the Associated Press began picking teams in 1939 with the United Press International following suit in 1952. In fact, no local schoolboy from any Lower Bucks County football team had made one of the statewide all-star groups through ’58 either. But that all changed in 1959 when Schuh was selected to the UPI’s second team as a fullback. And if that wasn’t enough, he made the team again in 1960 while Stricker made the Associated Press’ third team as a running back as well. Thanks to Schuh, the spotlight had finally begun to focus on Lower Bucks’ individual players instead of “only” on some of the top teams the area turned out from time-to-time. Adding to his high school honors, which included making every local area all-star team of the day throughout his three year career, Schuh also played in the 1960 Big 33 game – another first for a Lower Bucks player – which, among other things, lead to a long-term friendship with the squad’s quarterback, Joe Namath. 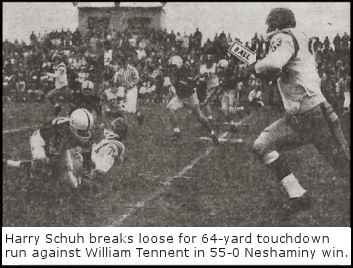 Heading to Memphis State for his college ball, Schuh was an All-American who then played for the Oakland Raiders for many years. He was a three time All-Pro and played in the 1967 Super Bowl against the Green Bay Packers. After retiring he was voted as a member of the Raiders all time team and is also a member of the Tennessee and Pennsylvania state sports Hall of Fames. Of course, he’s a member of Neshaminy’s Hall of Fame being inducted with the first group in 1986 while he was recently inducted into the newly created Bucks County sports Hall of Fame. He’s also on the Pennsylvania Football News’ All-20th Century football team (along with three other Redskin − Bob Baxter, Chris Bahr and Matt Bahr) and was selected the top high school football player in Lower Bucks County from 1950 through 2000 by The Courier Times in an article written in 2000 and titled “The Best of Bucks”. 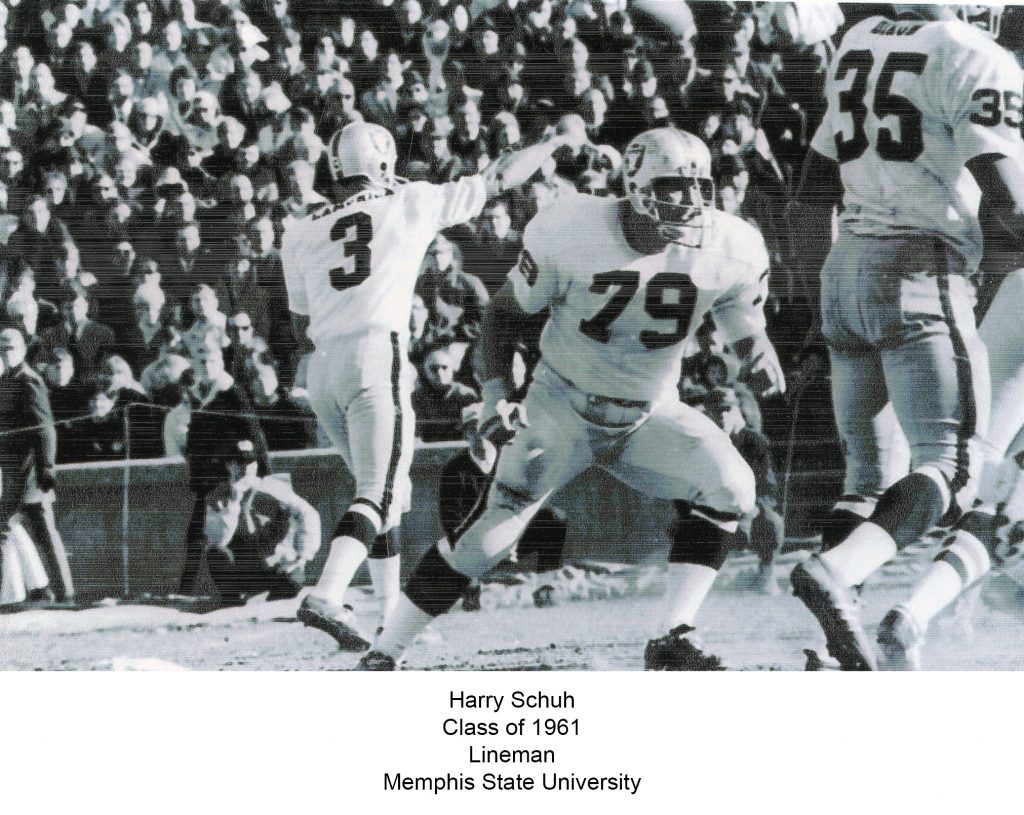 Editor’s Note: Is there a Neshaminy Redskin fan that doesn’t instantly recognize the name Harry Schuh? Not a chance with his efforts and notoriety on the gridiron continuing on for years after he left Neshaminy as chronicled above. With so many accomplishments during his career it’s easy to overlook that being selected to an All-State squad made that opportunity that much easier for the local players that followed in his foot steps − whether they were Redskins or those from Pennsbury, Bensalem, Council Rock, Bishop Egan or other schools in the Lower Bucks area. And as an example of those accomplishments and his physical abilities, Schuh was a tough basketball player who switched to wrestling his senior year in high school to assist with his agility on the football field. In just that one year on the mat, Schuh made it to the PIAA semi-final statewide unlimited class match as he made a bid for “All-State” in that sport too. Schuh also participated in multiple track and field events during his years in Langhorne. Well liked and community minded, Schuh currently resides with his family in Memphis − the city he fell in love with almost 50 years ago during his football recruiting trip to “State”.