Saturday, November 6, 1965. Following a course first set by head coach Harry Franks in the 1950s, his successor, John Petercuskie, scheduled the best and the toughest teams to play from around the Keystone state. And if there was one program that qualified for that role, the Altoona Mountain Lions were it. The western Pennsylvania powerhouse traced its grid roots back to the dawn of the twentieth century when the town was the hub of the Pennsylvania Railroad's repair facilities with the railroad conglomerate being one of the largest corporations in America and an economic and business force to be reckoned with. Thriving on the money, bodies and chutzpah the "Pennsy" supplied to Altoona, the Lions were a force as well. Still, the Redskins of the early '60s were unstoppable and although coming into Lower Bucks like a snarling big cat, Altoona headed back caged and declawed thanks to the footwork of Neshaminy's quarterback, Jimmy Colbert, and a determined effort by the entire team that made it clear that the Lions were no match for the whooping Indians of Langhorne.

LANGHORNE– Neshaminy High School must have the largest scrap yard in the world. 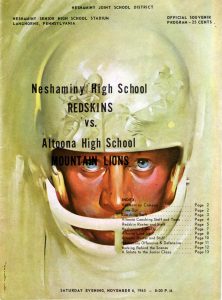 Neshaminy’s conquest of highly-rated Altoona was a masterpiece. The ‘Skins took advantage of every possible break to nail defeat on the Mountain Lions. Neshaminy also extended its five-year victory string to 45-0-4. The ‘Skins are 8-0-1 this season.

Coach Earl Strohm’s Mountain Lions, stunned from the outset, have tumbled to three consecutive losses. Altoona is 6-3 on the campaign.

Neshaminy displayed tremendous ball control in whipping the boys from Western Pennsylvania. In three periods the ‘Skins reeled off 50 plays to just 24 sorties by Altoona. Even in the fourth period when the game was fast becoming history Neshaminy had the better of it before flooding the field with subs.

Jimmy Colbert, Neshaminy’s talented quarterback, notched three touchdowns before leaving the game with a slight injury of his leg in the fourth period. Colbert is alright today. His scores came on runs of two, seven and one yards. 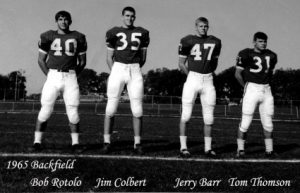 Altoona’s only six-pointer came early in the first session. Walt Beatty flipped a 37-yarder to Dick Frasca. The thrust shaved Neshaminy’s lead to 7-6.

Neshaminy’s biggest break came on the opening kickoff. Altoona’s Dick Beard couldn’t grab the handle on the pigskin and it squirted towards the sidelines on the 21-yard line. Neshaminy’s Harry Hoffman, a 160-pound guard, clamped onto the oval and slid out of bounds with Beard climbing his frame trying to regain the ball.

The ‘Skins moved right over the pigskin and started a six-play march to a touchdown. Colbert, a 6-2, 185-pound senior, slashed over from two yards out. Nolte made it 7-0.

The Mountain Lions roared right back to throw the large crowd into near convulsions. Altoona blasted 76 yards in nine-plays with Beatty’s 37-yard pass to Frasca doing the damage. A run for the PAT failed.

Later, Neshaminy was forced to hold Altoona on the four-yard line early in the second period which was another crucial part of the game.

The ‘Skins then slammed 90 yards to the Altoona six-yard stripe only to be pushed back to the 27-yard line on a holding penalty. Neshaminy lost possession but regained it right away when Barr intercepted a pass on the 42 and ran it back to the Altoona 13.

In two plays Colbert dashed six and seven yards to tally with 1:15 left before the half. Neshaminy was in command, 14-6, at intermission.

Neshaminy made it 20-6 with a 13-play advance which covered 54 yards in the third period. Colbert’s one-yard slant was the TD play. Barr’s 35-yard dash put the lid on the pine box in the fourth session.

Editor’s Note: Playing every team that dared include them on their schedule, the ‘Skins of the late 1950s and early 1960s were a juggernaut that seemed invincible. In fact, after watching Harry Franks’ clubs fashion a 69-10-2 record from 1952 through 1959, fans of Neshaminy couldn’t have been more pleased with John Petercuskie’s scorecard of 59-1-5 as earned from 1960 through the end of the 1965 season. And that was notwithstanding that faraway schools like the Allentown, Bethlehem and Easton roughnecks as well as Johnson City, NY, Altoona, Central Dauphin and Bishop Kenrick came calling along with tough local clubs like Pennridge, La Salle, Bishop Egan, Pennsbury and others too with each of them trying to knock the ‘Skins off their perch — but it just didn’t matter. Whether it was the coaching, the talent, the faithful and adoring fans or just the magic of the time, the phrase “Golden Era” best sums up that wonderful 14-year time frame for the Neshaminy “11” and its exploits on the girdiron. And 1965 was a fabulous exclamation point to it all as many stamped the Indians of that year as having the right to claim they were the top club in the state. With players like Jimmy Colbert, Gerry Barr, Tommy Thompson, Rich McHale, Harry Hoffman, Bruce Sauerbry, Fred Conger, Dave Rakita, Ernie Forchetti and others too, it couldn’t have been a better group to put a ribbon around Coach Petercuskie’s six-year campaign as the “Head Honcho” in Langhorne