December 1946. Closing out his fabulous career as a Redskin gridder, Wayne "Inky" Schneider lead the '46 club as it became the first Moleskinner team to take the LBCL crown. Posting a fine 7-2-1 record, that season was in no small part due to Schneider's all-around abilities and all-around efforts. A four-year starter, 1946 saw him rewrite records in Langhorne as he piled on the points by passing and running the ball from his quarterback slot. He also prevented more than a few scores from his defensive back position and punted the Indians out of a few holes along the way. Recognizing his stature on the gridiron, the Delaware Valley Advance memorialized "Inky" in an article it published at the conclusion of his time wearing the Blue and Red of Langhorne.

Schneider Rates as
One of Lower Bucks County’s All-Time Backs;

Had Hand in 18 of Redskins’ Scores This Season

Those words best describe the exploits of Captain Wayne “Inky” Schneider on the football field for Langhorne-Middletown High School.

In sports as well as life, the record speaks for itself. This year Schneider personally spearheaded the Red and Blue to its greatest offensive season by scoring nine touchdowns and eight extra points for a total of 62.

Equally as important, however, were nine passes that he threw which resulted in scores. Thus, Schneider had a hand in 18 of the Redskin touchdowns. No other Langhorne back in its gridiron history accomplished so much.

On two other occasions he placed the ball inside the five-yard line after long runs and then called plays enabling his mates to tally. Against Trenton he raced 40 yards to the three and allowed Armand Fizzano to go over from that spot and against Newtown, Schneider advanced 42 yards to the two-yard stripe on one play and again called Fizzano’s play on the following signals. 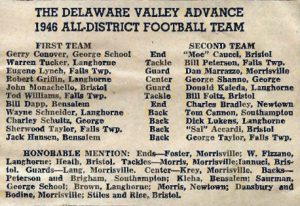 Included among his nine touchdowns were three long-gainers as follows: seventy-five yards against Bensalem with a pass interception; forty yards against Southampton with Phil Richter’s aerial; and a 42-yard run from scrimmage against Bristol.

Schneider probably will go down as one of the most accurate forward passers ever to play in the Lower Bucks scholastic ranks. His throws were remarkable even with opposing linemen chasing and hemming him in on several occasions. Coaches reveal that the true ability of a passer is his “pressure passing” and state that if a thrower can drop back and still throw with power and accuracy, he is indeed a skillful performer. Schneider was able to drift to either side or retreat backwards and still get off bullet-like heaves to his receivers. He handles a football like a baseball, flipping it with seemingly little effort. 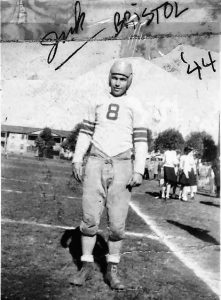 One of his most valuable assets is his stoic-like calmness under fire. Schneider, throughout his entire athletic career in baseball as well as football, has never been excited to the extent he lost control of the situation at hand. He appraises all situations like a field general in battle and seldom employs the wrong tactics. His play calling for Langhorne this year was beyond reproach and his punting averaged nearly 50 yards a try.

The Hulmeville gridder undoubtedly is one of the most proficient backs ever to play in the district. Although he lacks the power of Bristol’s immortal Johnny “King” Cole of the late 1920’s or the running prowess of Morrisville’s big and speedy Jimmy Yeager of the late 1930’s, Schneider must be included with these two district all-timers, swelling the list of backfield cavorters to a trio. Additionally, neither of the former two greats packed the passing ability of the talented Langhorne senior which lands him in a special class by himself. 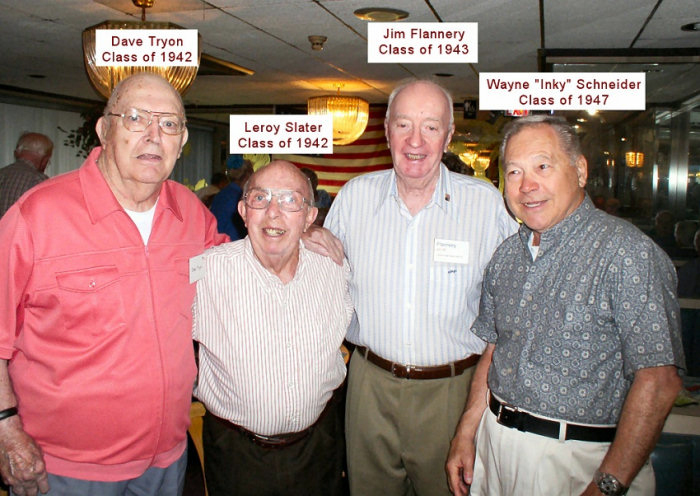 1946 Schneider and buds get together

Some of the 1940’s players recently reunited at a golf outing.

Editor’s Note: Frank Wayne “Inky” Schneider! No doubt that name inspired a certain trepidation among Lower Bucks’ scholastic gridders during the early to mid-40s as “The Ink” helped the ‘Skins snag their first grid crown in what would seem to be an annual happening in just a few short years. A four year starter, Schneider had dazzled the locals from his first kickoff return as a freshman till his last pass and rush as a senior. And not just content to show his stuff as a high school player, Schneider attended what was then called West Chester State Teachers College – now West Chester University – and delighted fans of the game at the next level. Leading the Golden Rams from his quarterback position, the Chester County school thrived under his direction as they played in two straight small school bowl games in 1949 and 1950 when “Inky” received national recognition as one of the nation’s top college quarterbacks. His play was strong enough too that it resulted in Schneider being voted into the West Chester’s athletic Hall of Fame. An avid private pilot, he went on to serve in the Air Force for over 20 years, seeing combat action in Korea and Vietnam as a fighter pilot. He also found time to earn both his Masters and Doctorate and he eventually taught in the Pennsbury School District for many years before retiring to Florida in the late 1990s. Of course, he is also a member of the Neshaminy football Hall of Fame being honored by his induction in its inaugural class of 1986. 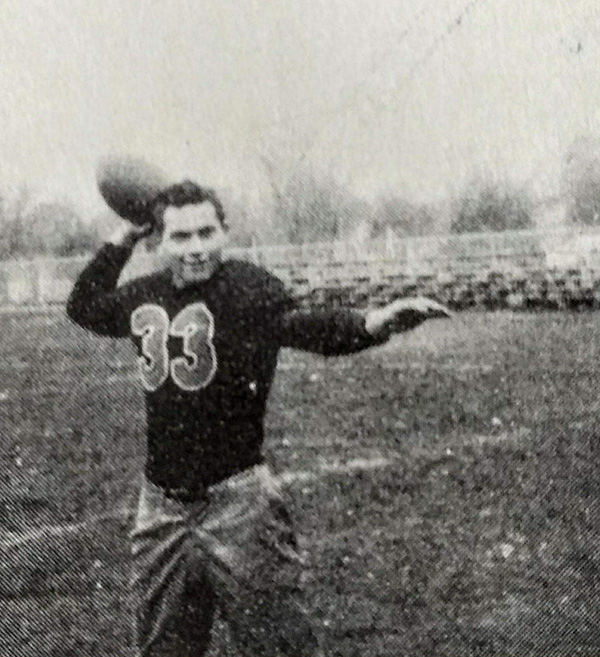