Saturday, November 12, 1977. It's been six years since the 1971 'Skins turned back the Falcons, 21−17, with 5 straight to the Falcons since that Tribe win. And that was despite the Langhorne teams having plenty of talented and driven players, dedicated coaches and adoring fans along the way. No doubt, Pennsbury had proven particularly pesky those years which saw the Falcons skid by in a few unexpected and heart−braking games plus a couple that were a little one−sided too. But the 1977 club, anchored by tough and seasoned players like Jim Riley, Tom Calkins and Chris Cechak who served as the team's tri−captains, was not at all satisfied with coming up on the short end of the stick. In fact, the Moleskinners came out for the annual battle against the Orange and Black with only one thought in mind – a win! Not stopping till the final gun sounded, a terrific offensive and defensive effort by the Red and Blue provided the loyal Langhorne followers with just what they had been waiting for. 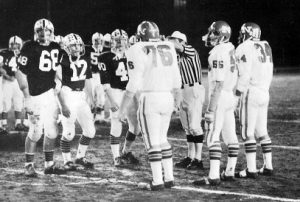 LANGHORNE − Charlie Schmidt sloshed through the spilled water and soda, making his way to the bulletin board in the corner of the training room.

He stripped off a soaking wet shirt, the price he paid for coaching Neshaminy Langhorne to a 20−7 win over Pennsbury Friday night, the Redskins first win over the Falcons after five straight years of losing.

“This,” said Neshaminy’s second year coach, “is what did it.”

He pointed to some clippings on the board, newspaper stories from the Redskins’ 31−0 1975 loss to the Falcons.

“Ron Steele, a defensive end on that (’75) team sent these to us,” Schmidt said. “Two years ago we beat Council Rock, and then got overconfident going into the Pennsbury game. The kids goofed around in practice and really didn’t work that hard and we got beat.”

“I could feel the same thing happening at the beginning of this week,” he said. “We didn’t have good practices Monday or Tuesday, but then those clippings came Wednesday. Ron put a note in there to the kids, telling them not to let it happen to them.”

“It kind of reinforced what we were telling the kids. They (Pennsbury) were a good football team. We were hoping the kids wouldn’t look past them. Those clips helped put it through to them. They were ready to give it all they had.” 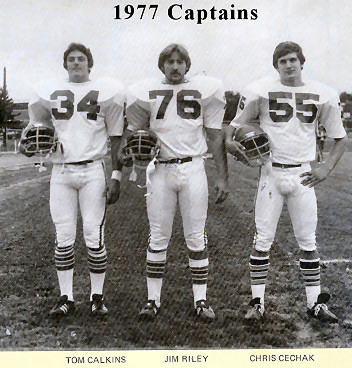 The redskins shocked Pennsbury by scoring all 20 of their points within a five−minute span of the second quarter.

Fullback Tom Calkins ran wild, racking up 175 yards on 18 carries in the game, 139 yards in the first half. And the Langhorne defense was brilliant, intercepting four Doc Galambos passes and recovering three fumbles.

Langhorne proved that point by turning a Galambos fumble (recovered by Tony Manzo) in the first quarter into a Matt Horton one−yard plunge with 7:58 left in the second.

Four plays later the Redskins got the ball back on a punt and, on the first play from scrimmage, Calkins rambled 91 yards down the right sideline for the TD.

“They made us play a different kind of football game after that,” said Kane. “We couldn’t just put the ball in the air because we’d only wind up giving it back to them. We had to try to break a big run to get us back into the game.”

The Neshaminy defense didn’t allow it, though. The only blemish on its performance was a Galambos to Bill Meade scoring strike in the fourth quarter.

“The defense came up with the big plays when they had to,” said Schmidt.

“It looked like our offense was really going to score a lot of points at the beginning of the game,” said defensive back Steve Fario, who intercepted a pass and recovered a fumble. “In the second half when they didn’t get any we (the defense) had to come through.”

“They ran away from me a lot.” Said tackle Jim Riley, “but the guys on the other side, guys like Bubba Wright and Steve Tibbles, shut them down.” 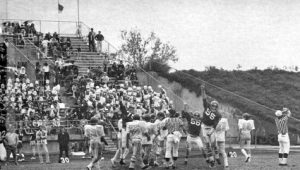 “Hey, everybody played great. A lot of us have worked and sweated together for three years now and it all paid off.”

“This was it. This was the game. The last time we beat Pennsbury was six years ago. Well tonight we won it for all every guy who lost to that team through those years. But we especially won it for ourselves.”

Ron Steel, wherever you are, Charlie Schmidt thanks you.

EXTRA POINTS: Pennsbury finished 2−4−0 in the Lower Buck County Football league, 5−4−1 overall. Neshaminy ended up 5−1−0 in the loop and 7−3 overall … The last time the Redskins beat Pennsbury was in 1971 by a 21−17 count … The Robert Hurst Award, given to the Neshaminy senior who shows the most dedication and courage, was awarded to senior Blake Spirko … Calkins also played well on defense. 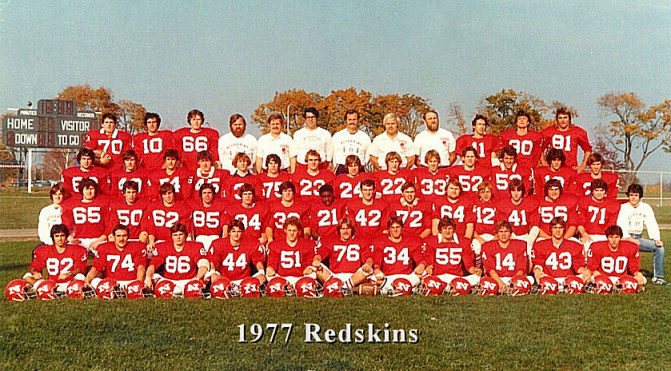 Editor’s Note: Pennsbury! There surely isn’t a Redskin football player, Langhorne resident, Neshaminy student, parent or fan that doesn’t feel the hair on his or her neck stand on end when the Falcons are the opponent. The perennial archrival of the ‘Skins, the Birds have proven to be a worthwhile cross−town gridiron foe since the first game in 1930 (when it was Langhorne−Middletown versus Fallsington). And while the series has seen some swings of power between the Orange and Black and the Indian Nation, in 1977 it was all Red and Blue. A talented group, beside turning back the invaders from Fairless Hills they also finished at 7−3 and snagged a share of the LBC flag behind the leadership of tough players like Jim Riley, Mr. Redskin and a Hall of Famer, along with fellow “Hall” inductees Tom Calkins, Bruce Cordelli and Alec Putezka. Other scrappy ‘Skins who also brought their heart and muscle to Heartbreak Ridge that year include Steve Fario, Randy Valone, Matt Horton, Tony Manzo, Ken Townsend, Craig Hill, Dennis Sheppard, Steve Tibbles, Gary Romett, Mike Ferri, Joe Bebey, Dave Baun, Dave Dunlap, Ken Cloak, Gerry Wright, Tim Riggs, Kevin Lane, Bruce Moyer, Chris Bezick, Steve Goodman, Greg Bartle, Blake Spirko, Bill Ferrara plus a host of others. And tough they were too as all 3 of their losses were by only a touchdown or less. Plus what’s most remarkable about the ’77 club is its success despite the dilution of available bodies that the “split” of the school district into two schools − Neshaminy and Maple Point − was already causing for both the Redskins and the their brothers, the Cougars. Be that as it may, on that wonderful November night in 1977, it was business as usual for the Indians and their fans up on the Ridge.