Saturday, October 28, 1949. In Head Coach Jim Egli's second year, the Redskins had overcome a 0-1-1 start by taking three straight to put the '49 season on the right track. Actually, the about face had put the Langhorne gang back in the race for the LBC title. But in the following week's home game against the always tough, conference foe, the Bristol Warriors, at the end of the first three quarters of play 'Skins fans were wondering what had happened as the visitors were on top, 6-0. With the clock becoming a factor, and at the mid-point of the final quarter, the Moleskinners were forced to punt once again as their offense seemed incapable of cobbling together even just one drive for a score. With Bristol taking over on their own 20-yard line after the exchange, a few plays later saw them backed up against their goal line after a squibbed snap put the visitors in a hole. Had the Blue and Red's luck taken a change for the better or would the Warriors simply kick themselves out of trouble?

LANGHORNE – Staging one of its greatest second half comebacks in their 20 years of football history, Langhorne-Middletown High’s fighting football forces pinned a 9-6 defeat on Bristol here last Saturday night before more than 2,000 fans.

Behind 6-0 at the half, the courageous Redskins bounced back by scoring nine points within the space of one minute in the fourth quarter to send Bristol reeling into an unexpected setback.

And after picking up their nine points in swift fashion, the charges of Coach Jim Egli hung on for seven minutes to fight back the passing attempts of a desperate Bristol eleven. The large crowd watching was on edge during those final minutes.

Langhorne seemed destined for defeat going into the final quarter. An 85-yard sustained drive by Bristol in the second quarter found Bill Moll crossing from the two-yard line. That 6-0 Bristol advantage loomed bigger and bigger as the two squads battled roughly the first three periods.

On the second play of the thrilling fourth, however, Ray Mongillo punted from the Langhorne 44 to the Bristol 20. Mongillo took over the punting role when Jack Cassedy was temporarily sidelined with an injury, one of the many suffered by both sides during the fray.

At this point fate played Bristol a jolt. On their first running attempt from scrimmage at the 20, Giagnocova’s snap from center zoomed over the head of Moll and rolled all the way to the one-inch line where Bristol recovered. Rich, standing in the end zone in punt formation, never got Giagnocova’s next snap. It again sailed over his head for an automatic two-point safety.

This cut Bristol’s lead to 6-2 and forced them to kickoff from the 20-yard line. Albright sailed a long boot that little Bill Schneider caught on the redskin’s 35. He sped 37 yards up the field on a beautiful return before being spilled on the Bristol 28. This run set up Langhorne’s score. On the very next play, with Kaupp doing a neat fake from his T-quarterback position, Max Lawrence zoomed like a jet projectile the remaining 28 yards to score the game-winning touchdown. The play baffled the entire Bristol team and many of the fans. It went through the right side of the Warriors’ line. Ray Mongillo added the extra point with a placement boot to give Langhorne the 9-6 win.

The remaining seven minutes left spectators on both sides limp. Bristol retaliated with passes by Harry Eisenbrey and Joe Condit. Jack Cassedy intercepted one on the 36 to halt the threat momentarily.

After Cassedy’s interception, the locals moved to a first down at the 50 with Mongillo, Cassedy and Schneider running. However, a pushing penalty set them back 15 yards to the 35. After three running maneuvers failed to pick up a first, Cassedy punted to the 42 and a clipping penalty cost Bristol 15 yards to the 35.

Bristol really threatened after taking the punt as Eisenbrey made good on a pass to Welker who lateralled to Moll. The play went from the 35 to Langhorne’s territory to the 42. Two subsequent passes failed. Then Eisenbrey faked a pass and ran to the 30 to give Bristol a first down.

Mongillo, a shining light for the Redskins all night, stepped in at this stage to intercept Eisenbrey’s aerial on the 15. He ran it back to the 20 with one minute and 40 seconds remaining to be played.

Langhorne tried to retain position of the ball to kill time. Lawrence went to the 23, Cassedy skirted end to the 27, but Mongillo lost a yard to the 26. Cassedy booted to the 40. On the first play from scrimmage Bristol was detected off-side to the 45. The last play of the game found Condit’s pass too long for its intended receiver. 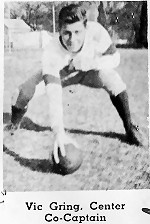 Langhorne had an all-star cast in the ball game. The entire line played its usual magnificent contest. Particularly ferocious were Bob Davis, Calvin Tobias and Vic Gring, all seniors. Herbie Kaupp, deft ball handler, proved he is the leading tactician in the conference. Ray Mongillo picked up much valuable yardage with his line plunging. Jack Cassedy, whose fighting brand of play was inspiring, ran well and punted excellently. Schneider set up the winning touchdown with his runback of the kickoff and Max Lawrence hot-footed his way to the 28-yard clincher. The team simply would not be beaten.

Bristol had its stars in Moll, who ripped Langhorne’s line to shreds in the first half. A low charging runner, Moll was not used so extensively in the second half. The punting of Rich was exceptional and passing of Condit and Eisenbrey always dangerous. 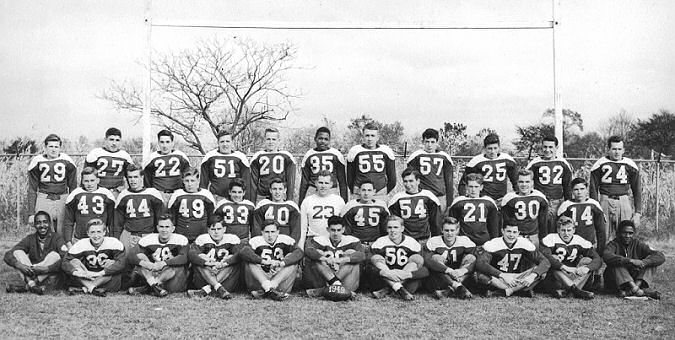 Editor’s Note: The Bristol Warriors! One of the earliest year-in, year-out teams on the Redskins’ schedule, the two had first lined up in 1931 and had played continuously since that season. A tough opponent, Bristol had dominated play with the ‘Skins during the Moleskinners’ first decade of the ’30s, finishing 8-0-1 against the Langhorne squads. But during the following ten years, and through to the 1949 contest, the record for that decade was just slightly in favor of the Warriors, 5-4, so the last contest of the ’40s did hold some “bragging rights” importance. With the win, and the series evened at 5-5, the stage was set for the 1950s when the rechristened Neshaminy Redskins would take charge as they fashioned a 9-1 overall record against the Warriors as the tables had been turned. However, and meanwhile, Coach Egli’s troops were still in the thick of the season and LBCL race when they lined up on that Saturday night in October of 1949. And showing the were up to the task, the ‘Skins edged the Warriors with their 4th quarter burst as they were paced by co-captains Vic Gring and Jack Cassedy. Plus with solid support provided by the likes of Calvin Tobias, Wayne Stradling, Robert Davis, Donald Caulfield, Herbert Kaupp, Bill Schneider, Max Lawrence, Ray Mongillo, John Romberger, Ken Dorsey, Chester Kellet, Jack McShane, Bob Castle, Ed Carber, Don Barnett, Charles Yantis, Don Leitch, Wes Galloway, Al Simpson and others too, the year came in at a positive 5-3-1.